Note: This blog originally appeared on Radical’s blog in 2017

While preparing for a pitch recently, I was recalling my experience in social media and I noted that the first campaigns I conducted were when the industry was calling it “New Media”. Possibly my most hipster moment ever – “I’ve been working in social media since before it was called social media!” At Radical, we’ve enjoyed watching the social aspect of marketing evolve from a “nice to have” into a “have to have” and in some cases, becoming the sole activation of a campaign.

But it took the industry a while to get there. In my early ad agency days, we often joked (or cried) about social’s place on the media plan as a little add-on at the end.

“We’ll have this budget for TV, this for radio, this for press, this for PR, this for digital,  leaving this for social.”

At the time, the pervading and damaging perception that social media was “free” or just for community management and customer service was holding it back from contributing to real business goals. Social had an uphill battle to claim its seat at the marketing table. However, campaign by campaign, the ideas became more daring, the metrics became more robust and the results became more impressive. Brands were becoming more confident in social media’s abilities to bear the responsibility of delivering campaign objectives.

Fast forward to 2017 and you can imagine my delight at social’s rise to prominence within the marketing world. Right now we’re seeing:

The platforms continued to evolve and, in some cases, surpassed the reach and targeting abilities of their media plan counterparts. And it didn’t stop there. Social began to replace online and offline press as a news source (Instant Articles and Trump’s Twitter account), replace texting with messaging apps (Messenger, Whatsapp and Snapchat), replace cameras with wearables (Spectacles), and now we’re embarking on an age where established broadcasters are being challenged by live social (Facebook Live, YouTube Live, Periscope and Snapchat Live).

However, I feel that’s it’s not just the technology or targeting capabilities that have changed. Consumers’ need for added value, instant gratification and quick response have also changed  – and marketing as we know is changing to keep up. The days of planning a campaign quarter by quarter, a year ahead of time,

now seem archaic. Pre-planning is all well and good, until it restricts your ability to be flexible. Just last week, Jennelle Tilling, Global CMP at KFC, said:

“We need quick pulses – marketing has fundamentally changed from marketing to publishing and the pace and turnaround is so much faster.”

It’s amazing to see the principles that guided early social media now permeating and reshaping marketing as we know it. Creative agility, responsive reflexes and continual consumer dialogue – the foundations of social media – are now critical elements for marketing in 2017. The world of marketing got a taste of the power of social media – and now we’re addicted.

Since writing a blog on Scheduling Facebook Posts I’ve received a few tweets looking for Facebook marketing tips. Well a nice little option Facebook have brought out recently is the ability for Business Pages to target specific demographics with their posts.

As can be seen in the image below by clicking on the “target” symbol, pages can now select specific fans to reach with specific messages by ensuring it appears in their newsfeed.

Business pages can select fans based on specific criteria including:

I feel this really represents the great marketing ability that Facebook can provide to businesses by drilling down and appealing to an individuals’ particular interests. After all, not every message posted on your Facebook page will appeal to every one of your fans. In the past few weeks we have used this option for clients who wished to broadcast a specific message without alienating the rest of the fans of the page.

I feel this will also have an effect on reducing the amount of “unlikes” received on a page as fans won’t feel that the content posted on the page does not apply or appeal to them.

So what’s the catch? Well this option is only available to Business Pages with 5,000 or more fans. I can see how this may be frustrating to smaller Business Pages who may wish to reach fans with particular interests. A way around this is to avail of Facebook’s Promoted Posts which will enable them to reach the newsfeeds of specific fans, albeit at an associated charge.

Ideally I would like to see this option rolled out to all Business Pages to enhance the Facebook marketing ability of all administrators. However, this would probably decrease the amount of people currently using the  Promoted Posts option thus reducing Facebook’s revenues which are under the global microscope since their launch on the stock exchange.

I hope this blog was helpful. Feel free to leave your comments below!

I have always been a huge advocate of the DCU Marketing Masters and would recommend the course to any aspiring marketer. My input today was to give Naoimh and the class an indication of what skills could be helpful to the students when applying for jobs after graduation. In my experience I’ve found that there is a demand for young graduates who have practical and proven experience in Digital Marketing practices. I advised that additional Google Analytics and Adwords classes could be a help. I also felt that adding a class which focused on Website usability and best practice could also be an asset to a new graduate.

I thoroughly enjoyed speaking with the class and I wish them all the best for the future.

2011 has proven to be to be one of the most challenging and rewarding years of my life.

In September of this year I graduated with my Masters in Marketing from DCU. The course has earned a reputation for it’s proactive approach to Social Media and Digital Marketing and I would recommend the course thoroughly. 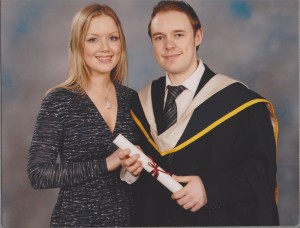 In August, I pursued my passion for Social Media marketing and joined a dynamic young start-up SocialMedia.ie. It gave me the perfect opportunity to follow two passions: running Social Media campaigns and training/ lecturing.

Interestingly one of the questions that came up in my interview for the job was,

“Where do you see yourself in a few years?”

My answer was to establish myself as a specialist in the field of Social Media which I feel I am gradually working towards. As part of the SocialMedia.ie team I have delivered presentations to The Institute of Directors, Dublin City Enterprise Board and helped to design and deliver the Practical Social Media Module in NUI Maynooth. 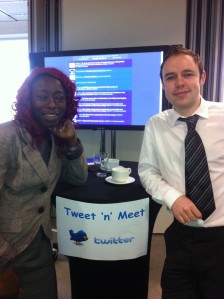 Of course the salesman in me has also been called out on a few occasions and this year I’ve had the opportunity to close some exciting deals with some high profile clients which will be revealed next year.

Outside of Social Media my passions for music have been kept entertained. I spent the summer in The Factory in Dublin recording a new album with The Frank and Walters. We’ve enjoyed some nice trips performing in Croatia, Hungary, France and some nice dates in the UK supporting Carter USM. The new album entitled “Grenwich Mean Time” will be released in March of next year.

Although I relocated to Dublin to complete the Masters, I’ve made regular trips back to Cork to host The Cork Music Show on Cork FM Community Radio. Each Sunday we endeavour to bring original Cork music to the airwaves. Ireland has always produced amazing musical talent but a major obstacle for original acts is that mainstream radio tends to favour international acts before promoting home grown talent. As I noted in a spontaneous interview for WorldIrish.com I hope mainstream radio will recognise the need to support Irish talent by playing upcoming acts and increasing their Irish audience.

Unsurprisingly, Social Media is never far away from my other activities. I coordinate the Frank and Walters Social Media campaigns and regularly release the Cork Music Show as a Podcast which can found here.

2012 will be an exciting year for the Frank and Walters which will see the release of the new album and a UK tour. Similarly for SocialMedia.ie, I predict 2012 will be a progressive and, hopefully, another successful year. Thanks for reading!

I was proud of this report I wrote while studying Global Marketing during my Masters in DCU so I decided to share it here. Enjoy, you marketing nerds!

Rayport and Sviokla (1995) stated that every business today competes in two worlds: The physical world of resources and the virtual world of information. The processes for creating value are not the same in the two worlds and hence demand different value adding strategies.

Porter (1985) stated competitive advantage could be created in a company’s value chain: the a series activities which connect a company’s supply side. Companies such as DHL and Fed Ex add value in their activities with information additives by allowing customers to track their packages online. In this case the information is creating value and not replacing the product.

The Web and the World

Rayport and Sviokla (1995) draw attention to the replacement of supply and demand as one of the main changes brought on by the internet. They state that in a world with increasing connectivity and free flowing information it is demand not supply that is scarce. Urban et al (2000) agree that the power is not in the hands of the consumer calling the internet shift “consumer to business” strategy where customers will demand best products at lower price!